THE PRIMARIES ARE OVER; WHAT DOES IT ALL MEAN? 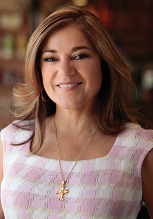 Two political experts, both members of WIL’s Board of Directors, and former Member of Congress, Loretta Sanchez, will discuss the results of the primaries in California and attempt to analyze the consequences of our primary for both California and the nation.

In one corner, weighing in as a Republican, is Eileen Padberg, long-time Orange County Republican campaign manager and political advisor.  She is most famous for managing Clint Eastwood’s race for Mayor of Carmel.  She was also the regional political director for George H. W. Bush’s 1988 Presidential campaign, responsible for California, Nevada and Hawaii.  Eileen is dedicated to women’s rights as well as to advising countries around the world who are trying to understand and adopt the rules of democracy.  She is so committed to women around the world that she spent almost two years in the Green Zone in Iraq helping Iraqi women gain the skills required to win contracts to help rebuild their own country.

In the other corner, weighing in as a Democrat, is Louise Adler, long-time political activist in Orange County (since her teen years), involved in years of recruiting, training and supporting Democratic candidates.  She is one of the three women (and only Democrat) who founded WIL back in 1993.  She has also had a successful career as a college professor and is now Emeritus Professor of Education at California State University Fullerton.  In 2016, she ran Orange County’s largest phone bank for Hillary, one that made over 40,000 phone calls in the four days prior to the election.  On the day after the election, overwhelmed with disappointment but undeterred, Louise started work on flipping the four vulnerable Congressional seats in Orange County from Republican to Democrat.

And in the midst of the discussion is WIL's long-time friend- a woman we truly miss-  Loretta Sanchez.