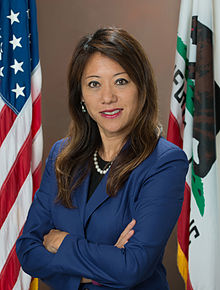 Your first response to the title “California State Treasurer” may be a desire to yawn.  But don’t!  The office of State Treasurer has a big impact on your life.  Fiona is our State’s chief investment officer, banker and financier of the state government.  She’s in charge of our State bonds and responsible for managing the State's investment accounts. She sits on the boards of the State's employee pension funds - CalPERS and CalSTRS.

Fiona is in control of YOUR tax money, so stay alert.

The California State Treasurer is one of California’s eight state-wide executive offices.  Only three are held by women, including WIL’s good friend Betty Yee.

Fiona was elected State Treasurer in 2018, with WIL’s endorsement.  She is a CPA and a past member of both the California Assembly and the State Board of Equalization.  She was born in New York to first generation Chinese parents and is married to a Native American firefighter.

As State Assemblywoman from the San Francisco area, Fiona worked to help both women and children.  She authored legislation that banned toxic chemicals in toys – known as the Rubber Duck Bill, a form of which was later adopted by the US Congress.  As the chair of the Domestic Violence Select Committee, she worked to allow incarcerated women to use the defense of domestic violence to seek a release from prison.

Fiona holds an important State office and is in a great position to have a continuing, important political role in our State.  Don’t miss this lunch.