will be WIL's speaker on APRIL 4 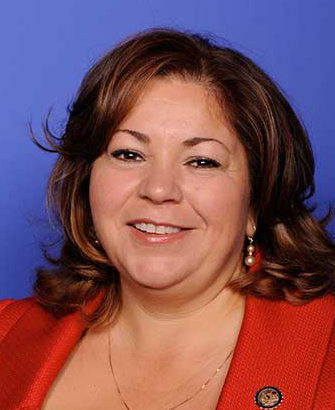 If you have heard Linda speak, you know she doesn't pull her punches.  She'll give us the inside scoop on the political insanity currently enveloping us.  She's been in Congress long enough to know the truth about the bad guys and the good guys.

Linda is the sister of Congresswoman Loretta Sanchez and the sixth of seven children born to immigrant parents from Mexico. She received her bachelor's degree from UC Berkeley and her law degree from UCLA.

After law school, she worked in private practice and then for the International Brotherhood of Electrical Workers and the National Electrical Contractors Association, and served as Executive Secretary-Treasurer of the OC Central Labor Council, AFL-CIO.

Linda made history with her sister Loretta as the first sisters in Congress, and again in 2009 when she became the eighth member of Congress to give birth while serving in office.  She and her husband, Jim Sullivan, are the parents of Joaquin Sanchez Sullivan.

Linda is the ranking member on the House Ethics Committee (a truly scary task), and serves on the Ways and Means Committee, playing a critical role in tax-writing, trade, Social Security, and Medicare.

Previously, Linda served on the House Judiciary Committee, where she was a leader in the investigation into the Bush Administration's firing of nine United States Attorneys in 2006.

Linda was also a leader in the investigation of the politicization of the Department of Justice, leading to her recommendation that Karl Rove be held in contempt of Congress for his failure to abide by a congressional subpoena.  She has also brought much-needed scrutiny to the misuse of arbitration clauses - currently a hot topic in DC - and has worked hard to help homeowners who have been hurt by the mortgage crisis.